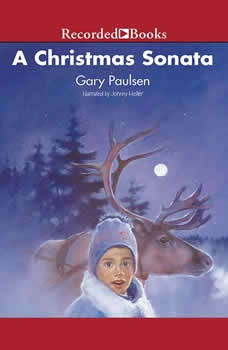 When a small boy spends Christmas in the snowy Minnesota countryside, he becomes the official scout for his young bedridden cousin, Matthew, who is running out of secrets to explore. Matthew already knows there is no Santa Claus, and he knows his life is ending. As Christmas Eve approaches, the boy worries that he will be unable to find something magical for Matthew. But when that hopeful night arrives, the two are joined in a miraculous surprise that changes their lives forever. The poignant story of A Christmas Sonata will touch listeners' hearts with the timeless mystery of the holiday season and a gentle reminder that wonderful things often come when least expected. Newbery Award-winning author Gary Paulsen continues to captivate young listeners and their parents with favorites like Mr. Tucket and Nightjohn. In language that is always lyrical and moving, his perceptive tales offer new ways to look at the sometimes difficult choices of childhood.