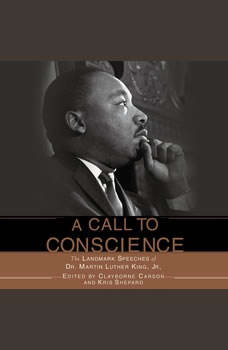 A Call to Conscience: The Landmark Speeches of Dr. Martin Luther King, Jr.

His speeches stirred a generation to change - and outlined a practical way to economic freedom and true democracy. His words would help bring about the end of a brutally unequal system - and would show a timeless method for achieving fairness and justice for all.These 12 moving speeches voiced by Dr. Martin Luther King, Jr. are original recordings collected here for the first time ever. In addition, some of the world's most renowned leaders and theologians share with you their reflections on these speeches, and give priceless firsthand testimony on the events that inspired their delivery.This audio takes you behind the scenes on an astonishing spoken historical journey - from a small, crowded church in Montgomery, AL, where "The Birth of a New Nation" ignited the modern civil rights movement; to the center of the nation's conscience; to the Mason Temple in Memphis, where more than 10,000 people heard Dr. King give his last transcendent speech, "I've Been to the Mountaintop", the night before his assassination.Narrators include Andrew Young, Coretta Scott King, Reverend Leon H. Sullivan, Hon. Walter E. Fauntroy, Yolanda King, Dr. Dorothy I. Height, Rev. Fred Shuttlesworth, Martin Luther King III, Rep. John Lewis, Ambassador George McGovern, and Sen. Edward M. Kennedy.

A Documentary History of the United S...
by Alexander B. Heffner