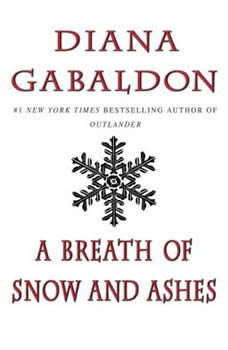 A Breath of Snow and Ashes

A worldwide sensation with more than 12 million copies in print, Diana Gabaldon’s Outlander series has produced #1 best-selling novels and earned a fiercely devoted fan base. Another spellbinding entry in the series, A Breath of Snow and Ashes continues the saga of 18th-century Scotsman Jamie Fraser and his 20th-century, time-traveling wife, Claire. The year is 1772, and the rift between Britain and its American colonies has put a frightening word into the minds of all concerned: revolution. In the backwoods of North Carolina, violence has already reared its ugly head, as cabins have been burned to the ground. To preserve the colony for King George III, the governor pleads with Jamie to bring the people together and restore peace. But Jamie has the privilege, although some might call it a burden, of knowing that war cannot be avoided. Claire has told him that the colonies will unite and rebel, and the result will be independence, with all British loyalists either dead or exiled. And there is an additional problem. Claire has discovered a newspaper clipping from 1776 that tells of Jamie’s death. With its epic scope, historical details, and sweeping romance, A Breath of Snow and Ashes is everything Gabaldon’s fans love and more.

It took a couple of chapters for me to get into this book. But once I did, I liked it just fine. Way too many characters to keep up with for my taste. First time reading a time traveler book.

A Breath of Snow and Ashes
Outlander #6