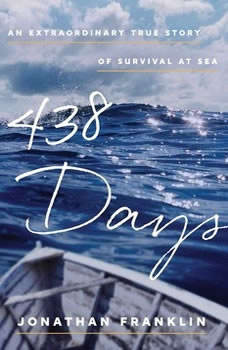 438 Days: An Extraordinary True Story of Survival at Sea

438 Days is the miraculous account of the man who survived alone and adrift at sea longer than anyone in recorded history—as told to journalist Jonathan Franklin in dozens of exclusive interviews.On November 17, 2012, Salvador Alvarenga left the coast of Mexico for a two-day fishing trip. A vicious storm killed his engine and the current dragged his boat out to sea. The storm picked up and blasted him west. When he washed ashore on January 29, 2014, he had arrived in the Marshall Islands, 9,000 miles away—equivalent to traveling from New York to Moscow round trip. For fourteen months, Alvarenga survived constant shark attacks. He learned to catch fish with his bare hands. He built a fish net from a pair of empty plastic bottles. Taking apart the outboard motor, he fashioned a huge fishhook. Using fish vertebrae as needles, he stitched together his own clothes. He considered suicide on multiple occasions—including offering himself up to a pack of sharks. But Alvarenga never failed to invent an alternative reality. He imagined a method of survival that kept his body and mind intact long enough for the Pacific Ocean to toss him up on a remote palm-studded island, where he was saved by a local couple living alone in their own Pacific Island paradise. Based on dozens of hours of interviews with Alvarenga and interviews with his colleagues, search and rescue officials, the medical team that saved his life and the remote islanders who nursed him back to health, this is an epic tale of survival, an all-true version of the fictional Life of Pi. With illustrations, maps, and photographs throughout, 438 Days is a study of the resilience, will, ingenuity, and determination required for one man to survive fourteen months, lost at sea.

Alone Against the North
by Adam Shoalts