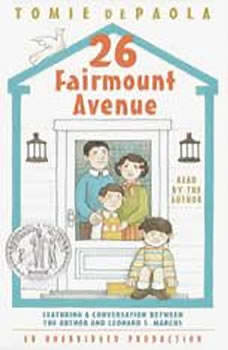 In a heartwarming first-person account, dePaola retells his experiences at home and in school when he was a boy. 26 Fairmount Avenue is full of humor, drama, suspense and just the day to day ups and downs of a little boy's life.

Shelia P. Moses is a National Book Award Finalist who has brought to life the story of Dred Scott, a man born into slavery in the 1700s. In 1846, Dred Scott and his wife, Harriet, filed a lawsuit for their freedom. After 11 years of debate, the case...

Charlotte Parkhurst was raised in an orphanage for boys, which suited her just fine. She didnt like playing with dolls, she could hold her own in a fight, and she loved to work in the stable. Charlotte had a special way with horses and wanted to spe...

Ted and Me
by Dan Gutman

Dan Gutman has won a wide and growing audience among young readers, who have eagerly devoured all the books in the sports-loving author’s Baseball Card Adventure series. In Ted & Me, time-traveling Stosh has finally been found out by the FBI. ...

Zora and Me
by Victoria Bond

When a young man’s body is found by the railroad tracks, the murder and its mysterious circumstances threaten the peace and security of a small Florida town. Zora believes she knows who killed Ivory, and she isn’t afraid to tell anyone w...

26 Fairmount Avenue: On My Way
by Tomie dePaola

Tomie is overjoyed because his baby sister, Maureen, is finally strong enough to come home from the hospital. Over the next months, he is in a dance recital and he gets to go to the World's Fair. Soon, the school year is at an end. Summer is full of...

When Sacagawea's son asks her about her life, she isn't sure where to begin. Does she start with her birth as a Shoshoni? Her kidnapping by an enemy tribe at age eleven? Or her role as the famous guide for the Lewis and Clark expedition? She's se...

26 Fairmount Avenue: What a Year!
by Tomie dePaola

The year 1940 is a very big year for Tomie-it's the start of first grade, and it's his first birthday in the new house at 26 Fairmount Avenue. It's also the first year that Tomie gets to go trick-or-treating with his older brother, Buddy. Then the h...

Satch & Me
by Dan Gutman

Acclaimed author of the Parents' Choice Jim & Me, Dan Gutman adds a fictional twist to the true story of pitching legend "Satchel" Paige. After facing a flamethrowing Little League hurler, 13-year-old "Stosh" Stoshack time-travels back to 1942 to jo...

Sarah Miller's accomplished debut presents a fictionalized account of Anne Sullivan's life and her time as Helen Keller's teacher. Arriving at Ivy Green in 1887, Anne was a partially blind orphan who had been tasked with teaching the difficult blind...