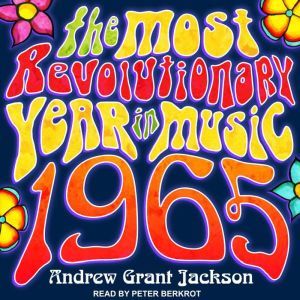 1965: The Most Revolutionary Year in Music

During twelve unforgettable months in the middle of the turbulent Sixties, America saw the rise of innovative new sounds that would change popular music as we knew it. In 1965: The Most Revolutionary Year in Music, music historian Andrew Grant Jackson (Still the Greatest: The Essential Songs of The Beatles' Solo Careers) chronicles a groundbreaking year of creativity fueled by rivalries between musicians and continents, sweeping social changes, and technological breakthroughs. Jackson weaves fascinating and often surprising stories into a panoramic narrative of the seismic cultural shifts wrought by the Civil Rights Movement, feminism, Youthquake, the miniskirt, the Pill, psychedelics, and Vietnam. 1965 is a fascinating account of a defining year that produced some of the greatest songs, albums, and artists of all time.