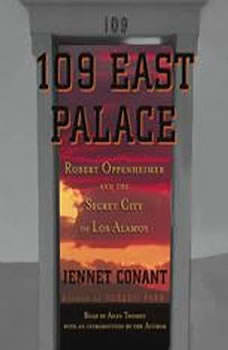 They were told as little as possible. Their orders were to go to Santa Fe, New Mexico, and report for work at a classified Manhattan Project site, a location so covert it was known to them only by the mysterious address: 109 East Palace. They were greeted by Dorothy McKibbin, an attractive widow who was the least likely person imaginable to run a front for a clandestine defense laboratory. They stepped through her threshold into a parallel universe -- the desert hideaway where Robert Oppenheimer and a team of world-famous scientists raced to build the first atomic bomb before Germany and bring World War II to an end. Despite all the obstacles, Oppie managed to forge a vibrant community at Los Alamos through the sheer force of his personality. Dorothy devoted herself to taking care of him and his crew, and supported him through the terrifying preparations for the test explosion at Trinity and the harrowing aftermath of Hiroshima and Nagasaki. In this deeply moving account, Conant reveals an enigmatic man, who served his country at tremendous personal cost and whose singular achievement, and subsequent undoing, is at the root of our present nuclear predicament.