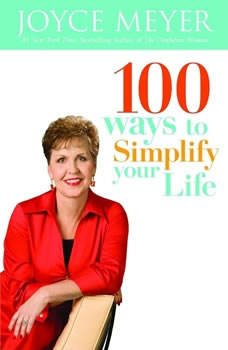 100 Ways to Simplify Your Life

Joyce Meyer is one busy lady. Apart from the normal demands of life, she teaches daily on TV and radio, writes books, holds conferences in dozens of cities every year and ministers around the world...and she runs Joyce Meyer Ministries. So she's had to learn how to make the most of every minute of the day! In 100 Ways to Simplify Your Life, Joyce shares the most effective secrets she's learned over the years for making the most of each minute of the day. In less than two pages per entry, Joyce gives us eminently 'doable' tips that are clearcut and ...well, SIMPLE. But they can change your whole outlook, not to mention your schedule.