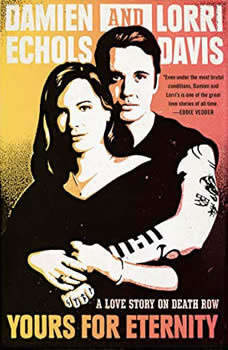 Yours for Eternity: A Love Story on Death Row

An explosive bestseller, Life After Death turned a national spotlight on Damien Echols, who was just eighteen when he was wrongly condemned to death. But one of the most remarkable parts of his story still remained untold. After seeing a documentary about the “West Memphis Three,” Lorri Davis—a New Yorkbased landscape architect—wrote him a letter, beginning a thirteen-year correspondence that witnessed their marriage while Echols was still on death row and culminated in Echols’ release in 2011. Sharing their private letters, Yours for Eternity is a must-read for the legions who followed the case as well as anyone who appreciates an extraordinary love story.

An astonishing, revelatory, and redemptive memoir from two women who escaped the international drug trade, with never-before-revealed details about El Chapo, the Sinaloa Cartel, and the dangerous world of illicit drugs.Olivia and Mia Flores are mar...

From a National Book Award-winning biographer, the first complete life of legendary gangster Al Capone to be produced with the cooperation of his family, who provided the author with exclusive access to personal testimony and archival documents. Fro...

The Iceman
by Anthony Bruno

At home, Richard Kuklinski was a dedicated suburban family man; on the street, he was the Iceman, a professional hit man and lethal scam artist, a man so heartless he kept one of his victims frozen for over two years to disguise the time of death. H...

The Last Narco
by Malcolm Beith

The dense hills of Sinaloa, Mexico, are home to the most powerful drug lord since Pablo Escobar: Joaquin "El Chapo" Guzman. Responsible for uncountable murders since taking charge of the Sinaloa cartel in the 1990s, and a central figure in the recen...

The true story of super-criminal Jon Roberts, star of the documentary Cocaine Cowboys.   American Desperado is Roberts’ no-holds-barred account of being born into Mafia royalty, witnessing his first murder at the age of seven, becomi...

Alfonso "Little Al" D'Arco, the former acting boss of the Luchese crime family, was the highest-ranking mobster to ever turn government witness when he flipped in 1991. His decision to flip prompted many others to make the same choice, including Jo...

In this gritty New York Times best-seller, the true story of a crooked deal between the FBI and the Irish Mob is exposed. By providing a penetrating look into the mean streets of mid-1970s South Boston, the author shows how two kids from the neighb...

Looking for an escape from childhood abuse, Reymundo Sanchez turned away from school and baseball to drugs, alcohol, and then sex, and was left to fend for himself before age fourteen. The Latin Kings, one of the largest and most notorious street ga...

Updated with a conclusion by the author that features new, independent corroboration of Frank Sheeran's revelations about the killing of Jimmy Hoffa, the killing of Joey Gallo and the murder of JFK, along with stories that could not be told before.P...