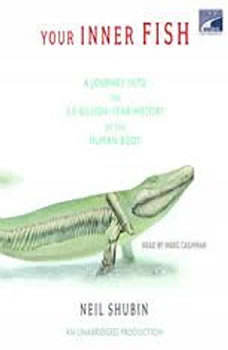 Your Inner Fish: A Journey into the 3.5-Billion-Year History of the Human Body

Why do we look the way we do? What does the human hand have in common with the wing of a fly? Are breasts, sweat glands, and scales connected in some way? To better understand the inner workings of our bodies and to trace the origins of many of today’s most common diseases, we have to turn to unexpected sources: worms, flies, and even fish.

Neil Shubin, a leading paleontologist and professor of anatomy who discovered Tiktaalik–the “missing link” that made headlines around the world in April 2006–tells the story of evolution by tracing the organs of the human body back millions of years, long before the first creatures walked the earth. By examining fossils and DNA, Shubin shows us that our hands actually resemble fish fins, our head is organized like that of a long-extinct jawless fish, and major parts of our genome look and function like those of worms and bacteria.

Shubin makes us see ourselves and our world in a completely new light. YOUR INNER FISH is science writing at its finest–enlightening, accessible, and told with irresistible enthusiasm.