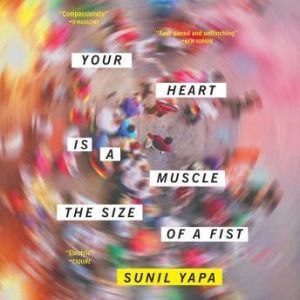 Your Heart Is a Muscle the Size of a Fist

A Finalist for the PEN/ Faulkner Awardn Amazon Best Book of the Year A Washington Post Notable Book A Barnes & Noble Discover Pick One of Bustle's "Most Important Books of 2016" Named Most Anticipated Book of the Year in Wall Street Journal, Entertainment Weekly, TIME, Huffington Post, The Chicago Tribune, BuzzFeed, Houston Chronicle, San Francisco Chronicle, Orlando Sentinel, Ploughshares, Bustle, TheMillions, BookRiot, The Oregonian, The San Diego Union-Tribune, River City Reading, IndigoGrief-stricken after his mother's death and three years of wandering the world, Victor is longing for a family and a sense of purpose. He believes he's found both when he returns home to Seattle only to be swept up in a massive protest. With young, biracial Victor o one side of the barricades and his estranged father--the white chief of police--on the opposite, the day descends into chaos, capturing in its confusion the activists, police, bystanders, and citizens from all around the world who'd arrived that day brimming with hope. By the day's end, they have all committed acts they never thought possible. As heartbreaking as it is pulse-pounding, Yapa's virtuosic debut asks profound questions about the power of empathy in our hyper-connected modern world, and the limits of compassion, all while exploring how far we must go for family, for justice, and for love.