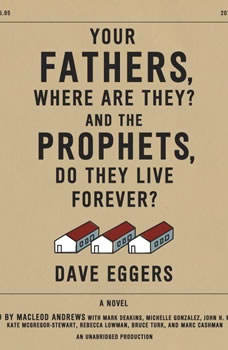 Your Fathers, Where Are They? And the Prophets, Do They Live Forever?

From Dave Eggers, best-selling author of The Circle, a tightly controlled, emotionally searching novel. Your Fathers, Where Are They? And the Prophets, Do They Live Forever? is the formally daring, brilliantly executed story of one man struggling to make sense of his country, seeking answers the only way he knows how.

In a barracks on an abandoned military base, miles from the nearest road, Thomas watches as the man he has brought wakes up. Kev, a NASA astronaut, doesn't recognize his captor, though Thomas remembers him. Kev cries for help. He pulls at his chain. But the ocean is close by, and nobody can hear him over the waves and wind. Thomas apologizes. He didn't want to have to resort to this. But they really needed to have a conversation, and Kev didn't answer his messages. And now, if Kev can just stop yelling, Thomas has a few questions.