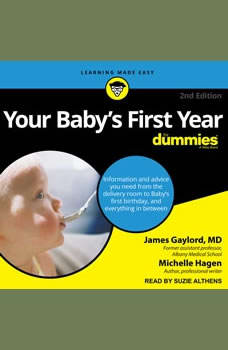 Your Baby's First Year For Dummies

Everything parents need to give their babies the best start Each year, more than four million babies are born in the United States-and the first year of a baby's life is a joyous, challenging, and sometimes overwhelming time. Your Baby's First Year For Dummies serves as a complete guide for baby's first twelve months-from what to do when arriving home from the hospital to handling feeding, bathing, and sleeping routines to providing the right stimuli for optimal progress. Packed with tips on every aspect of baby's physical, emotional, and social development, this friendly guide gives parents advice on such important topics as breastfeeding vs. bottle-feeding, teething, baby toy safety, food preparation, food allergies, traveling, and much more.

The Sh!t No One Tells You
by Dawn Dais

There comes a time in every new mother's life when she finds herself staring at her screaming, smelly "bundle of joy" and wishing someone had told her that her house would reek of vomit, or that she shouldn't buy the cute onesies with a thousand imp...

What's Going on in There?
by Ph.D. Eliot

As a research neuroscientist, Lise Eliot has made the study of the human brain her life's work. But it wasn't until she was pregnant with her first child that she became intrigued with the study of brain development. She wanted to know precisely how...