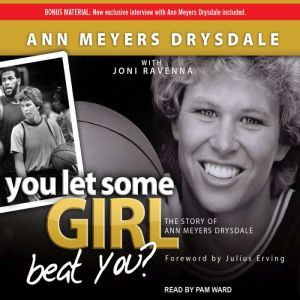 You Let Some Girl Beat You?: The Story of Ann Meyers Drysdale

Ann Meyers Drysdale is one of the greatest stars in the history of basketball. But her rise wasn't without controversy. Her 1979 NBA bid to play with the Indiana Pacers brought a barrage of criticism. But Ann simply wanted to play among the best. She had always competed with the guys, and she never let anyone keep her down. A female first in many categories, Ann Meyers Drysdale was the first woman ever signed to a four-year athletic scholarship to UCLA, where she remains the only four-time Bruin basketball All American, male or female. Ann was also the only woman ever asked to compete in ABC Sports' Superstars, pitting her against elite athletes like Mark Spitz, Joe Frazier, O. J. Simpson, and Mark Gastineau. In You Let Some Girl Beat You? Ann shares with us her inspirational story for the first time.