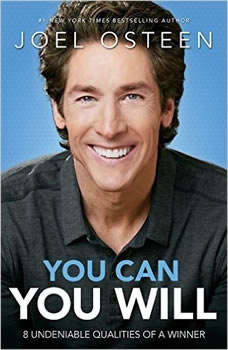 You Can, You Will: 8 Undeniable Qualities of a Winner

In YOU CAN, YOU WILL, Joel Osteen shares eight undeniable qualities of winners that can help you to reach your potential and achieve new levels of success in your life. You are created to be a winner. Get these eight principles deep down on the inside and boldly go in the direction of your destiny. Keep Your Vision in Front of You - Dare to dream big dreams. Run Your Race - Focus on your unique course and goals. Expect Good Things - Anticipate great opportunities. Have a Positive Mind-set - Take control of your thoughts and attitudes. Commit to Excellence - Do your best and maintain high standards. Keep Growing - Be proactive, be intentional, build on your gifts, and continually improve. Serve Others - Invest yourself in others. Stay Passionate - Light the fire within and approach life with enthusiasm.

Many of the church leaders we talk to are seeking an escape from the not-so-simple life. // "Relax. This book is not about another church model. If you are a church leader, you have been exposed to plenty of models, and most of them are on your shel...

How to Lead When You're Not in Charge
by Clay Scroggins

"This book will be one of the most, if not the most, pivotal leadership books you'll ever read." - Andy Stanley"If you're ready to lead right where you are, this book can show you how to start." - Dave Ramsey"Read this book! The marketplace is full ...

The Name of God Is Mercy
by Pope Francis

NEW YORK TIMES BESTSELLER • In his first book published as Pope, and in conjunction with the Extraordinary Jubilee of Mercy, Pope Francis here invites all humanity to an intimate and personal dialogue on the subject closest to his heart&md...

Autopsy of a Deceased Church
by Thom S. Rainer

No one wants to see a church die. And yet, far too many churches are dying. For more than twenty-five years, Dr. Thom Rainer has helped churches grow, reverse the trends of decline, and has autopsied those that have died. From this experience, he ha...

Next Generation Leader
by Andy Stanley

Follow Your Own Lead! The Next Generation Leader has been challenging young Christians eager to learn, grow, and lead in ministry or in the marketplace since its original release in 2003. Now with an all-new look, this repackaged version continues...

Lift Your Vision High Vision is a preferred future. A destination. Vision always stands in contrast to the world as it is. Visioneering, according to bestselling author Andy Stanley, is “a clear mental picture of what could be, fueled by the c...

Be a People Person
by John C. Maxwell

Being a leader means working with people, and that's not always easy! Whether in your office, church, neighborhood, or elsewhere, your interpersonal relationships can make or break you as a leader. That's why it's so important to be a "people pers...

Pastor, preacher, and New York Times bestselling author of The Prodigal Prophet Timothy Keller shares his wisdom on communicating the Christian faith from the pulpit as well as from the coffee shop.Most Christians—including pastors—strug...

A vision. You as a leader may have it, but has your organization caught it? If a leader's vision is all about what could be and what should be, why are you buried under what is? Noted author and pastor Andy Stanley points out that if followers don't...