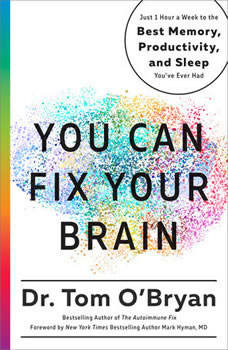 You Can Fix Your Brain: Just 1 Hour a Week to the Best Memory, Productivity, and Sleep You've Ever Had

For anyone worried about any type of brain ailment, ranging from the chronic conditions to simple brain fog and fatigue, this essential guide covers the full spectrum of prevention to treatment.

We've all experienced brain fog—misplaced keys, forgotten facts, a general feeling that you're just feeling off today. And many of us will experience that "fog" manifesting as something more permanent—either in ourselves or our loved ones.

No matter what your current brain health state may be, You Can Fix Your Brain will enable and empower you to take concrete steps that will make an immediate difference in your brain’s vitality, clarity, and energy. Your memory will improve, fogginess will disappear, you’ll be less tired all the time, and much more. And, you’ll learn that these aren’t empty promises. Dr. Tom O’Bryan, author of The Autoimmune Fix, knows how to create lasting changes in health, and he’s here to share them with you.

It’s a step-by-step approach to better cognitive function—being selective about what's on your fork, what's in your environment, and how you take care of yourself can make a world of difference. With only one hour a week of practice, in 6 months, you can say goodbye to brain fog and welcome a better long-term memory and a sharper mind.

Includes a PDF of recipes, lists, and graphs.

The Environmental and Genetic Causes of Autism
by James Lyons-Weiler, PhD

The Environmental and Genetic Causes of Autism delves deep into the full body of past and current research to reveal how genetic predispositions and environmental factors can combine to produce the conditions autism and autism spectrum disorders (A...

More than four million Americans suffer from Alzheimer's, and as many as twenty million have close relatives or friends with the disease. Revolutionizing the way we perceive and live with Alzheimer's, Joanne Koenig Coste offers a practical approach ...