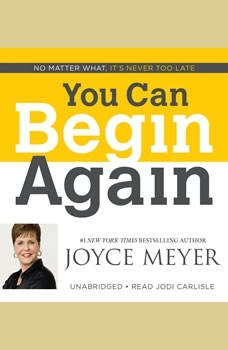 You Can Begin Again: No Matter What, It's Never Too Late

It's never too late for a new beginning. Look closely and you'll see that theme all through the Bible. Page after page, God delights in turning tragic endings into new beginnings. A childless woman conceives in her old age; a fearful, self-conscious shepherd becomes a leader of millions; and a prostitute becomes a wife and mother in the lineage of Christ. Every biblical fresh start reveals the amazing, awe-inspiring hope we have for our own new beginnings in God's plan for our lives.In YOU CAN BEGIN AGAIN, bestselling author Joyce Meyer explores the beauty and infinite supply of God's love and grace. Through inspiring stories, Scriptural principles, and her classic practical, life-application approach, Joyce powerfully demonstrates that God isn't done with you yet.If you're stuck in a rut, disappointed by an outcome, hurting from a wound, failing in an endeavor, struggling in a relationship, or unsure about the future. . .don't give up. Don't give up on yourself, and don't give up on the God Who loves you and offers you a new beginning today.