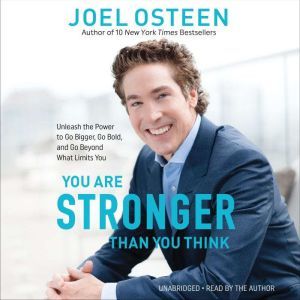 You Are Stronger than You Think: Unleash the Power to Go Bigger, Go Bold, and Go Beyond What Limits You

From the author of ten New York Times bestsellers, discover a strength that pushes you forward—and the power to do what you couldn’t before.

You may feel weak and fatigued, but that is not your destiny. When you feel overwhelmed, like you can’t go on, He comes in and gives you special strength. Strength that you didn’t get on your own. Strength to move forward when you should be stuck, strength to overcome that hurdle, strength to outlast that opposition. You’re going to feel strength that you didn’t have, joy when you could be discouraged, and hope when you should be depressed. You’re going to have the power to endure, the favor to overcome, and the determination to outlast.

He’s going to bring blessings, increase, favor, and healing that He’s already prepared. It’s going to be easier than you thought, and it’s going to happen sooner than you think. As you read You Are Stronger Than You Think, feel a power rising that you have never felt—a strength, a courage, a determination, a stamina. He won’t let you stay overwhelmed. You may feel that way at times, but that’s not how your story ends. You’re going to feel a strength that pushes you forward, a power to do what you couldn’t do before.

​Believe and declare that you are strong, you are victorious, and you are able. You’re going to accomplish dreams bigger than you imagined, overcome obstacles that look insurmountable, and reach the fullness of your destiny!