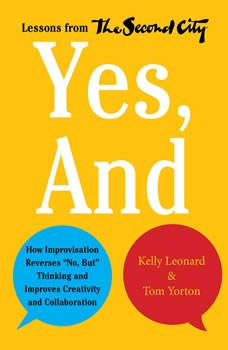 Yes, And: How Improvisation Reverses "No, But" Thinking and Improves Creativity and Collaboration--Lessons from The Second City

The Second City has launched the careers of celebrated comic performers such as Tina Fey and Stephen Colbert and produced award-winning content. But it's the actual improvisational process developed and honed over the years by The Second City that has become its legacy. Players master an ability to co-create in ensembles, using philosophies that celebrate a "Yes, And" approach. They embrace authenticity and failure, and espouse the idea of "following the follower," which allows any member of the team to assume a leadership role.For more than two decades, The Second City has taken these same principles in thousands of corporate clients, showing leaders how to apply the tools of improv to common business challenges. Here, for the first time, Second City executives Kelly Leonard and Tom Yorton describe how you can use the same skills that thrill audiences around the world to improve your emotional intelligence, increase creativity, and learn to pivot out of tight and uncomfortable situations. In this engaging, often humorous, and highly practical book, you will learn how to become a more compelling leader and a more collaborative follower by employing the seven elements of improv: Yes, And, by which you give every idea a chance to be acted on; Ensemble, reconciling the needs of individuals with those of the broader team; Co-creation, which highlights the importance of dialogue in creating new products, processes, and relationships; Authenticity, or being unafraid to speak truth to power, challenge convention, and break the rules; Failure, teaching us that not only is it okay to fail, but we should always include it as part of our process; Follow the Follower, which gives any member of the group the chance to assume a leadership role; Listening, in which you learn to stay in the moment, and know the difference between listening to understand and listening merely to respond.When we are fiercely following the tenets of improvisation, we generate ideas both quickly and efficiently, we weather storms with more aplomb, and we don't work burdened by a fear of failure. Even better, these qualities are fully transferable to our lives outside the office.More people are beginning to recognize what The Second City has known for a long time: In the midst of a revolution in how we learn, communicate, and work, professional success often rests on the same pillars that form the foundation of great comedy: Creativity, Communication, and Collaboration. That's where improvisation comes in.