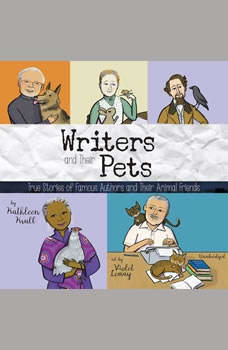 Discover how animals influenced twenty of the world’s most beloved authors, from Charles Dickens to J. K. Rowling.Did you know that a dog saved Pablo Neruda’s life? Or that Mark Twain had a cat named Bambino? Or that Edgar Allan Poe wrote with a cat on his shoulders?Writers and Their Pets tells these stories and many more that will delight not only children but also literary experts, history lovers, and animal enthusiasts. Each short chapter focuses on one author’s life, using simple and entertaining text to weave tales of the pets that affected the lives and works of these writers.Writers and Their Pets features a diverse list of both male and female international authors, from the nineteenth to the twenty-first century, including Beatrix Potter, E. B. White, Elizabeth Barrett Browning, Kurt Vonnegut, Maurice Sendak, Ernest Hemingway, and more.

Would you believe it if I told you that every bird you see-even the smallest hummingbird-is a dinosaur? Well, that's what many scientists now believe! Follow along as scientists examine ancient fossils and pose new theories on how prehistoric dinosa...

The Elephant Whisperer
by Lawrence Anthony

When South African conservationist Lawrence Anthony was asked to accept a herd of "rogue" wild elephants on his Thula Thula game reserve in Zululand, his common sense told him to refuse. But he was the herd's last chance of survival: they would be k...

How Do Dinosaurs Learn to Read?
by Jane Yolen

America's favorite dinosaurs romp and roar as they soak books in the bathtub, throw them, and finally learn how to enthusiastically -- and carefully -- read them...with Mama and Papa at bedtime. Get ready to laugh at this lighthearted, heartwarming...

Nubs: The True Story of a Mutt, a Marine & a Miracle
by Brian Dennis

Nubs, an Iraqi dog of war, never had a home or a person of his own. He was the leader of a pack of wild dogs living off the land and barely surviving. But Nubs's life changed when he met Marine Major Brian Dennis. The two formed a fast friendship, ...

James Herriot's Treasury for Children collects all of the beloved veterinarian's delightful tales for young listeners. From the springtime frolic of Oscar, Cat-About-Town to the yuletide warmth of The Christmas Day Kitten, these stories-radiantly il...

Emily Arnold McCully won a Caldecott Medal for her book Mirette on the High Wire. In Wonder Horse, McCully crafts a charming tale based on the true story of Doc Key and his remarkable horse Jim. When Doc Key decides to breed a racehorse, what he get...

It’s unbelievable but true! Born on the same day in the same small, German circus town, young Bram and his elephant, Modoc, had a lifelong friendship that spanned over eight decades. But it was never easy. From the breakup of the circus to the...

The heartwarming true story of two penguins who create a nontraditional family is now available in a sturdy board book edition. At the penguin house at the Central Park Zoo, two penguins named Roy and Silo were a little bit different from the oth...

How Do Dinosaurs Choose Their Pets?
by Jane Yolen

Come along on a playful romp as dinosaurs choose outrageous pets, shocking their parents in this fantastically comic new addition to Yolen and Teague's bestselling, award-winning series. "Can I keep it? It's so cute!" Brimming with laugh-aloud hum...