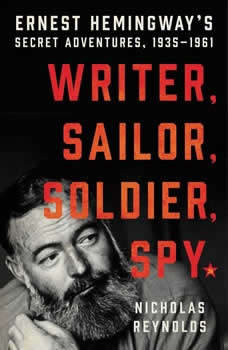 A former CIA officer and curator of the CIA Museum unveils the shocking, untold story of Nobel Prize-winning author Ernest Hemingway’s secret life as a spy for both the Americans and the Soviets before and during World War II.While he was the curator of the CIA Museum, Nicholas Reynolds, a longtime military intelligence expert, began to discover tantalizing clues that suggested Ernest Hemingway’s involvement in the Second World War was much more complex and dangerous than has been previously understood. Writer, Sailor, Soldier, Spy brings to light for the first time this riveting secret side of Hemingway’s life—when he worked closely with both the American OSS, a precursor to the CIA, and the Soviet NKVD, the USSR’s forerunner to the KGB to defeat Adolf Hitler and the Nazis.Reynolds dig deep into Hemingway’s involvement in World War II, from his recruitment by both the Americans and the Soviets—who valued Hemingway for his journalistic skills and access to sources—through his key role in gaining tactical intelligence for the Allies during the liberation of Paris, to his later doubts about communist ideology and his undercover work in Cuba. As he examines the links between his work as a spy and as an author, Reynolds reveals how Hemingway’s wartime experiences shook his faith in literature and contributed to the writer’s block that plagued him for much of the final two decades of his life. Reynolds also illuminates how those same experiences also informed one of Hemingway’s greatest works—The Old Man and the Sea—the final novel published during his lifetime. A unique portrait as fast-paced and exciting as the best espionage thrillers, Writer, Sailor, Soldier, Spy illuminates a hidden side of a revered artist and is a thrilling addition to the annals of World War II.