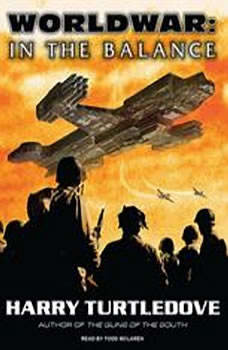 Worldwar: In the Balance

War seethed across the planet. Machines soared through the air, churned through the seas, crawled across the surface, pushing ever forward, carrying death. Earth was engaged in titanic struggle. Germany, Russia, France, China, Japan: the maps were changing day by day. The hostilities spread in ever-widening ripples of destruction: Britain, Italy, Africa...the fate of the world hung in the balance. Then the real enemy came. Out of the dark of night, out of the soft glow of dawn, out of the clear blue sky came an invasion force the likes of which Earth had never known—and worldwar was truly joined. The invaders were inhuman and they were unstoppable. Their technology was far beyond our reach, and their goal was simple: Fleetlord Atvar had arrived to claim Earth for the Empire. Never before had Earth's people been more divided. Never had the need for unity been greater. And grudgingly, inexpertly, humanity took up the challenge. In this epic novel of alternate history, Harry Turtledove takes us around the globe. We roll with German panzers, watch the coast of Britain with the RAF, and welcome alien-liberators to the Warsaw ghetto. In tiny planes we skim the vast Russian steppe, and we push the envelope of technology in secret labs at the University of Chicago. Turtledove's saga covers all the Earth, and beyond, as mankind—in all its folly and glory—faces the ultimate threat; and a turning point in history shows us a past that never was and a future that could yet come to be.