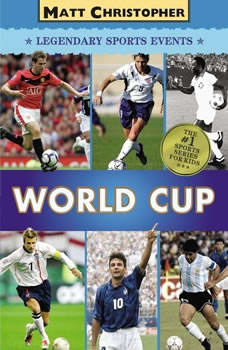 Soccer. No other sport in the world captivates a bigger audience -- and no other competition electrifies its fans like the World Cup. Now, just in time for the next World Cup competition, comes a book just for kids, jam-packed with information about each and every World Cup ever played. Want to know who was behind the biggest surprise defeat of the 1950 tournament? It's in here. Curious about what happened to the Jules Rimet trophy when it was in England? Turn to the chapter on World Cup 1966. Wondering what the term Total Football means? You'll find the answer here -- along with much, much more, including a bonus chapter on the Women's World Cup and lists of winners, runners-up, and scores of past Cups. And because it all comes from Matt Christopher, young readers know they're getting the best sports writing on the shelf.

An all-new LEGO Ninjago chapter book! Features three easy-to-read original stories perfect for reluctant readers. When Kai and his friend Skylor hear there's a new villain in town running a school for crooks, it's up to the ninja to teach those ba...

“Highly recommended for high school and ambitious middle school readers.” —School Library Journal"A valuable addition to STEM-themed collections." —VOYAAn in-depth look into the extraordinary life of the world’s most i...

If you found The Amazing Book is Not on Fire at least mildly interesting, or even if you didn't read it at all, then you will LOVE our audiobook! Not only do you get us sensually narrating the whole thing in your ears, but there ...

The Secret is an international phenomenon that has inspired millions of people to live extraordinary lives. The Secret to Teen Power makes that knowledge accessible and relevant to today's teens. It explains the law of attraction in relation to teen...

G'night mateys . . .His Royal Highness The Prince of Wales sends an inspiring message about how we can change the course of environmental destruction by living in harmony with Nature.In an adaptation of his adult book Harmony: A New Way of Looking ...

A hilarious and heartwarming illustrated novel from the writer of MINIONS; a classic in the making. Playing is serious business. Welcome to Toy Academy: where toys learn to play. This is where action figures train to battle, stuffed animals study...

Original stories from the hit CW television series Riverdale ! Based on the massively successful CW show, Riverdale, this prequel novel explores what the gang was doing before Season One. Why did Jughead and Archie have a falling out? What did Ver...