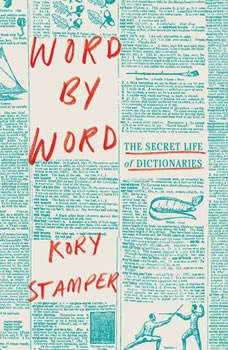 Word by Word: The Secret Life of Dictionaries

Do you have strong feelings about the word “irregardless”? Have you ever tried to define the word “is”? Brimming with intelligence and personality, this vastly entertaining account of how dictionaries are made is a must-read for word mavens.

Many of us take dictionaries for granted, and few may realize that the process of writing dictionaries is, in fact, as lively and dynamic as language itself. With sharp wit and irreverence, Kory Stamper cracks open the complex, obsessive world of lexicography, from the agonizing decisions about what to define and how to do it, to the knotty questions of usage in an ever-changing language. She explains why small words are the most difficult to define, how it can take nine months to define a single word, and how our biases about language and pronunciation can have tremendous social influence. And along the way, she reveals little-known surprises—for example, the fact that “OMG” was first used in a letter to Winston Churchill in 1917.

Word by Word brings to life the hallowed halls (and highly idiosyncratic cubicles) of Merriam-Webster, a startlingly rich world inhabited by quirky and erudite individuals who quietly shape the way we communicate. Certain to be a delight for all lovers of words, Stamper’s debut will make you laugh as much as it makes you appreciate the wonderful complexities and eccentricities of the English language.

You Might Be a Zombie and Other Bad News
by null Cracked.com

You're going to wish you never picked up this book. Some facts are too terrifying to teach in school. Unfortunately, Cracked.com is more than happy to fill you in: A zombie apocalypse? It could happen. 50% of humans are infected with a parasite th...

Reading the OED
by Ammon Shea

"I'm reading the OED so you don't have to. If you are interested in vocabulary that is both spectacularly useful and beautifully useless, read on..."So reports Ammon Shea, the tireless, word-obsessed, and more than slightly masochistic author of Re...

Why Do Clocks Run Clockwise
by David Feldman

Ponder, if you will ...What is the difference between a kit and a caboodle?Why don't people get goose bumps on their faces?Where do houseflies go in the winter?What causes that ringing sound in your ears?Pop-culture guru David Feldman demystifies t...

When Do Fish Sleep and Other Imponderables
by David Feldman

Ponder, if you will ...Why are tennis balls fuzzy? How come birds don't tip over when they sleep on telephone wires?What makes yawning contagious?Why, oh why, do roosters have to crow so early in the morning?Pop-culture guru David Feldman demystifi...

How to Shop for Free
by Samantha Rose

You've heard of amazing deals, online discounts, outlet shopping—but has anyone showed you how to shop for free? Meet Kathy Spencer—hot, hip mom of four who can whittle a $267.22 grocery bill down to one penny. One penny. Now, this smart...

YouTube sensation Matthew Santoro amazes with eye-opening facts that are sure to blow your mind.Matthew Santoro's originality and humor has attracted millions of fans, making him a beloved YouTube star. His weekly videos on amazing and little-known ...

Why Do Men Fall Asleep After Sex
by Mark Leyner

Did the mega-bestselling Why Do Men Have Nipples? exhaust your curiosity about stuff odd, icky, kinky, noxious, libidinous, or just plain embarrassing? "No," you say? Well good, because the doctor and his able-bodied buddy are IN! Again! Now go-to ...