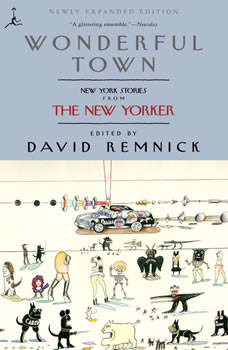 New York City is not only The New Yorker magazine's place of origin and its sensibility's lifeblood, it is the heart of American literary culture. Wonderful Town, an anthology of superb short fiction by many of the magazine's most accomplished contributors, celebrates the seventy-five-year marriage between a preeminent publication and its preeminent context with this collection of forty-four of its best stories from (so to speak) home.

East Side? Philip Roth's chronically tormented alter ego Nathan Zuckerman has just moved there, in "Smart Money." West Side? Isaac Bashevis Singer's narrator mingles with the customers in "The Cafeteria" (who debate politics and culture in four or five different languages) and becomes embroiled in an obsessional romance. And downtown, John Updike's Maples have begun their courtship of marital disaster, in "Snowing in Greenwich Village."

Wonderful Town touches on some of the city's famous places and stops at some of its more obscure corners, but the real guidebook in and between its lines is to the hearts and the minds of those who populate the metropolis built by its pages. Like all good fiction, these stories take particular places, particular people, and particular events and turn them into dramas of universal enlightenment and emotional impact. Each life in it, and each life in Wonderful Town, is the life of us all.

Including these stories from the magazine's most iconic writers:

“The Five-Fourty-Eight” by John Cheever
“Distant Music” by Ann Beattle
“Sailor off the Bremen” by Irwin Shaw
“Physics” by Tama Janowitz
“The Whore of Mensa” by Woody Allen
“What it was Like, Seeing Chris” by Deborah Eisenberg
“Drawing Room B” by John O’Hara
“A Sentimental Journey” by Peter Taylor
“The Balloon” by Donald Barthelme
“Another Marvellous Thing” by Laurie Colwin
“The Failure” by Jonathan Franzen
“Apartment Hotel” by Sally Benson
“Midair” by Frank Conroy
“The Catbird Seat” by James Thurber
“I See You, Bianca” by Maeve Brennan
“You’re Ugly, Too” by Lorrie Moore
“Signs and Symbols” by Vladimir Nabokov
“Poor Visitor” by Jamaica Kincaid
“In Greenwich, There Are Many Gravelled Walks” by Hortense Calisher
“Some Nights When Nothing Happens Are the Best Nights in this Place” by John McNulty
“Slight Rebellion Off Madison” by J. D. Salinger
“Brownstone” by Renata Adler
“Partners” by Veronica Geng
“The Evolution of Knowledge” by Niccolo Tucci
“The Way We Live Now” by Susan Sontag
“Do the Windows Open?” by Julie Hecht
“The Mentocrats” by Edward Newhouse
“The Treatment” by Daniel Menaker
“Arrangement in Black and White” by Dorothy Parker
“Carlyle Tries Polygamy” by William Melvin Kelley
“Children Are Bored on Sunday” by Jean Stafford
“Notes from a Bottle” by James Stevenson
“Man in the Middle of the Ocean” by Daniel Fuchs
“Me Spoulets of the Splendide” by Ludwig Bemelmans
“Over by the River” by William Maxwell
“Baster” by Jeffrey Eugenides
“The Second Tree from the Corner” by E. B. White
“Rembrandt’s Hat” by Bernard Malamud
“Shot: A New York Story” by Elizabeth Hardwick
“A Father-To-Be” by Saul Bellow
“Farewell, My Lovely Appetizer” by S. J. Perelman
“Water Child” by Edwidge Danticat
“The Smoker” by David Schickler