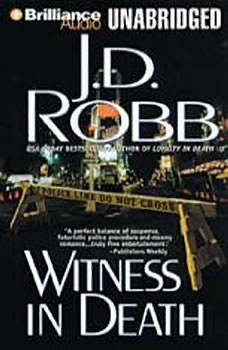 Opening night at New York's New Globe Theater turns from stage scene to crime scene when the leading man is stabbed to death center stage. Now Eve Dallas has a high profile, celebrity homicide on her hands. Not only is she lead detective, she's also a witness—and when the press discovers that her husband owns the theater, there's more media spotlight than either can handle. The only way out is to move fast. Question everyone and everything…and in the meantime, try to tell the difference between the truth—and really good acting.

Witness in Death
In Death Series #10