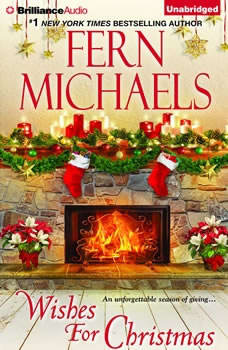 Christmas is a time for family and friends to gather and celebrate old bonds…and form new ones. New York Times bestselling author Fern Michaels brings together the beloved heroines from two celebrated series—the Sisterhood and the Godmothers—for a holiday to remember forever.…Throughout the years, the ladies of the Sisterhood have delivered their own style of vigilante justice to those who most deserve it. But this Christmas, instead of finding and punishing bad guys, all Maggie Spitzer wants is to bring a little more joy to the world—and especially to a beloved teacher from her past. And as the Sisters unite to find her, they learn that no holiday treat is as fulfilling as giving to others.…It’s a lesson that would come as no surprise to Teresa Amelia Loudenberry—“Toots” to all who love her. With a little help from the other Godmothers, Toots is preparing for Charleston’s annual holiday showcase of historic homes. Her mansion is festooned with antique ornaments, beautifully arranged by Charleston’s most exclusive design firm. But when the Godmothers sense trouble with one of the decorators, they must tackle a mystery and hope for a happy ending.…While staying at the Grove Place Inn as a guest of the Sisterhood’s Myra Rutledge, Godmother Sophie meets the inn’s owner, Holly Noel Simmons. Despite her name, Holly’s feeling none too festive around her handsome employee Gannon Montgomery. Gannon blames Holly for his former company’s downfall. Yet the holiday season holds surprises for everyone, and the promise of far sweeter Christmases yet to come.…When Sisters and Godmothers unite, the result is a warm and wonderful holiday—with a special touch of magic.…