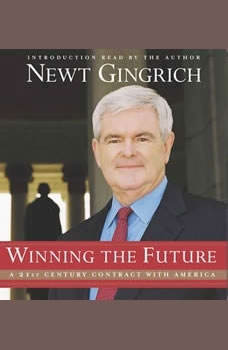 Winning the Future: A 21st Century Contract with America

In the twenty-first century, America could be destroyed.The dangers are manifold: Terrorism. Judges who think they're God (and who are anti-God). Rising economic challenges from China and India. Immigrants and young Americans who know little about American history and values. Can America survive? Yes, says Newt Gingrich, and we as Americans can do more: We can create a safer, more prosperous, and healthier America for our children and grandchildren. How? By enacting a 21st Century Contract with America. When he was Speaker of the House, Newt Gingrich issued his first Contract with America. What was the result? Sweeping reform that shocked Washington and spurred an economic recovery for the nation, including: the first major tax cut in sixteen years; real, lasting welfare reform; and four years of balanced budgets. But the challenges now are even starker, and Newt is back with a new plan for American greatness. The challenges of the 21st Century are great, says Newt Gingrich, but so are the opportunities. The decisions we make over the next four years will determine our future. And no book can be more important for making the right choices than Newt Gingrich's national bestseller Winning the Future: A 21st Century Contract with America.