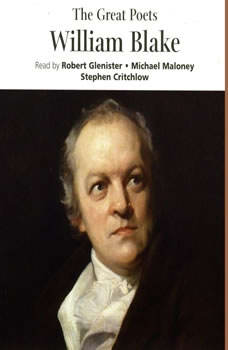 Naxos AudioBooks begins its new series of Great Poets – represented by their most popular poems on one CD – with William Blake, whose 250th anniversary of birth falls this year. This CD contains all of his most popular works – Tyger, the Auguries of Innocence, Jerusalem, as well as some lesser-known poetry that demonstrates the range and power of his verse. They are strikingly read by Robert Glenister, Michael Maloney and Stephen Critchlow.

‘Of Man’s First Disobedience, and the Fruit of the Forbidden Tree, whose mortal taste Brought Death into the World, and all our woe…’ Paradise Lost is the greatest epic poem in the English language. In words remarkable for t...

Samson Agonistes, the 'dramatic poem' by John Milton, was published in 1671, three years before the poet's death. Written in the form of a Greek tragedy, with the Chorus commenting on the action, it follows the biblical story of the blind Samson as ...

‘Of Man’s First Disobedience, and the Fruit of that Forbidden Tree, whose mortal taste Brought Death into the World, and all our woe.’ So begins the greatest epic poem in the English language. In words remarkable for their richness...

No poet is more closely identified with the First World War than Wilfred Owen. His striking body of work, grim to the point of brutality yet, at the same time, majestic and awe-inspiring, defines the war for us. It is in each of these famous poems t...

Venus & Adonis, The Rape of Lucrece
by William Shakespeare

These two great poems date from Shakespeare’s early years and are full of passion and invention. In Venus and Adonis, the goddess of love pleads with the beautiful boy to submit to her advances and become her love – but he only want...

The Prelude
by William Wordsworth

Wordsworth’s Prelude is the consummation of his achievement as the great founder of English romanticism. An autobiography in verse, it tells of his childhood in the Lake District, his student days in Cambridge, his passion for the French Revol...

Savor the most celebrated love poems in the English language. Written almost 400 years ago, the sonnets of William Shakespeare are passionate and exalted, rich in imagery and alliteration, and full of mystery and intrigue.

A collection of the best-known poems by Gerard Manley Hopkins (1844–1889). One of the Victorian era’s greatest writers, Hopkins’ reputation has continued to grow since his death. Our Great Poets series, launched in 2007, has proven...