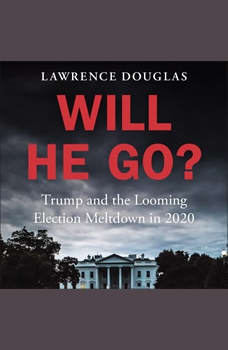 Will He Go?: Trump and the Looming Election Meltdown in 2020

In advance of the 2020 election, legal scholar Lawrence Douglas prepares readers for a less-than-peaceful transition of power. It doesn't require a strong imagination to get a sense of the mayhem Trump will unleash if he loses a closely contested election. It is no less disturbing to imagine Trump still insisting that he is the rightful leader of the nation. With millions of diehard supporters firmly believing that their revered president has been toppled by malignant forces of the Deep State, Trump could remain a force of constitutional chaos for years to come. WILL TRUMP GO? addresses such questions as:How might Trump engineer his refusal to acknowledge electoral defeat? What legal and extra-legal paths could he pursue in mobilizing a challenge to the electoral outcome?What legal, political, institutional, and popular mechanisms can be used to stop him?What would be the fallout of a failure to remove him from office? What would be the fallout of a successful effort to unseat him?Can our democracy snap back from Trump?Trump himself has essentially told the nation he will never accept electoral defeat. A book that prepares us for Trump's refusal to concede, then, is hardly speculative; it is a necessary precaution against a coming crisis.

Running Against the Devil
by Rick Wilson

The Russia Hoax
by Gregg Jarrett