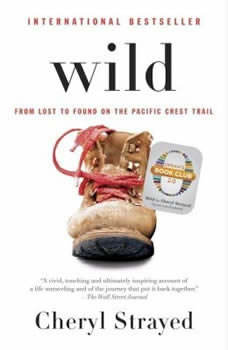 Wild: From Lost to Found on the Pacific Crest Trail

A powerful, blazingly honest memoir: the story of an eleven-hundred-mile solo hike that broke down a young woman reeling from catastrophe—and built her back up again.

At twenty-two, Cheryl Strayed thought she had lost everything. In the wake of her mother's death, her family scattered and her own marriage was soon destroyed. Four years later, with nothing more to lose, she made the most impulsive decision of her life: to hike the Pacific Crest Trail from the Mojave Desert through California and Oregon to Washington State—and to do it alone. She had no experience as a long-distance hiker, and the trail was little more than “an idea, vague and outlandish and full of promise.” But it was a promise of piecing back together a life that had come undone.

Strayed faces down rattlesnakes and black bears, intense heat and record snowfalls, and both the beauty and loneliness of the trail. Told with great suspense and style, sparkling with warmth and humor, Wild vividly captures the terrors and pleasures of one young woman forging ahead against all odds on a journey that maddened, strengthened, and ultimately healed her.

The New York Times bestseller and one of the 100 Most Notable Books of 2005. In the tradition of This Boy's Life and The Liar's Club, a raucous, poignant, luminously written memoir about a boy striving to become a man, and his romance with a bar.J....

Such a Pretty Fat
by Jen Lancaster

A NOTE FROM JEN LANCASTER:"To whom the fat rollsâ€¦I'm tired of books where a self-loathing heroine is teased to the point where she starves herself skinny in hopes of a fabulous new life. And I hate the message that women can't poss...

The Middle Place
by Kelly Corrigan

Kelly Corrigans brilliant memoir explores the middle place between childhood and adulthood and how she made the leap to the other side. Intertwining her own story with that of her largerthanlife, IrishAmerican father, she illustrates a powerful fath...

A Wolf at the Table
by Augusten Burroughs

Nominated for the 2009 Audiobook of the Year"As a little boy, I had a dream that my father had taken me to the woods where there was a dead body. He buried it and told me I must never tell. It was the only thing we'd ever done together as father and...

This book is pretty much what youd expect if you have read the Amazon summary. Long, healing walk on the PCT that heals the soul. Yep, thats about right. Learning about the PCT and California and Oregon natural wonders is interesting. Great brief appearances by other PCT hikers. Watching the evolution into badass Amazonian hiking queen is empowering and fun. The worst part is the family element: Her mother died and family drifted apart. The grieving is acceptable, but by the end I had the thought: Get over it already. She died years ago. Youve hiked hundreds of miles and still havent resolved yourself that your parents will die? So, tedious by the end on the emotional angle.