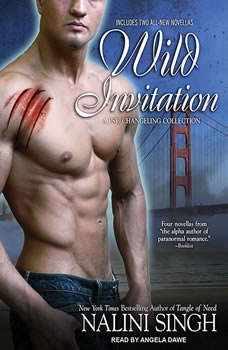 Wild Invitation is an exciting collection of Psy/Changeling stories from New York Times bestselling author Nalini Singh. In Beat of Temptation, innocent Tamsyn has always had a place in her heart for Nathan, a blooded DarkRiver sentinel. But is she ready for the fierce demands of the mating bond? In Stroke of Enticement, a wary young teacher, skeptical about love, arouses the man—and the animal—in an aggressive leopard changeling who must prove his affections are true. The collection also features two never-before-published novellas: In Declaration of Courtship, Grace, a shy submissive wolf, finds herself pursued by the last man she ever would have imagined: a SnowDancer lieutenant said to be "mad, bad, and dangerous to know." In Texture of Intimacy, SnowDancer healer Lara discovers the searing joys—and unexpected challenges—of being mated to quiet, powerful Walker, a man used to keeping his silence.