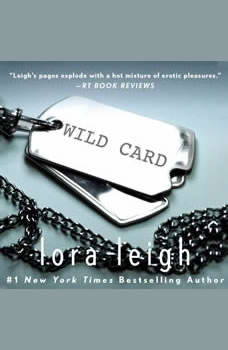 It was supposed to be simple. In Lora Leigh's Wild Card, all Navy SEAL Nathan Malone had to do was rescue three young girls from a Colombia drug cartel, then allow himself to be captured just long enough to draw out a government spy. That was before his mission went disastrously wrong…and before his wife, Bella, was told that Nathan was never coming home. Bella's mourned her husband's death for three long years. But she has no idea he's still alive. Forced to assume a new identity, the man Nathan was is now dead. If he can get back to his wife, can he keep the secret of who he really is…even as desire threatens to consume them? And as danger threatens to tear Bella from Nathan's arms once more?

This was a great book! I was intrigued from start to finish. And, the loves scenes are absolutely delicious! I love how Lora Leigh writes. The couples in her love scenes are always in love and feel such passion for each other.