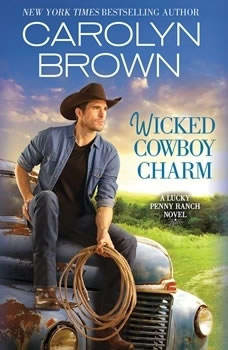 REAL TEXAS COWBOYS DON'T KISS & TELL Josie Dawson is new in town, but it doesn't take a local to know that Deke Sullivan is trouble--in a smokin' hot package. He's sweet, sexy, and has charmed just about every woman in Dry Creek, Texas. Well, Josie won't be next. She'll keep her distance, even if he is great with babies and makes a mean cup of homemade hot chocolate. Deke Sullivan really is a one-woman type of guy. He just had to do a lot of looking to find that one woman. Now he thinks he's found her and he won't let a strong, sassy gal like Josie slip away. Just when he's wondering how to convince her he only has eyes for her, they get stranded in a tiny cabin during a major blizzard. If Deke can melt her heart before they dig out of the snow, he'll be the luckiest cowboy in Texas . . . The Lucky Penny Ranch Series: Wild Cowboy Ways Hot Cowboy Nights Merry Cowboy Christmas Wicked Cowboy Charm

The Gift
by Shelley Shepard Gray

The Schwartz family is happy to be spending Christmas on their new farm in Hart County. But when Susanna Schwartz hears gunshots that cause her buggy to overturn, and then her little sister falls through a wooden bridge into an icy creek, it becomes...

"Fun-filled...sweet, Southern holiday romance." --RT Book Reviews THIS CHRISTMAS, SANTA'S WEARING A STETSON'Tis the night before Christmas and all through the house is the presence of one wickedly hot cowboy who's come to stay for the holiday. Fion...

Ross Gardiner has had his fill of difficult relationships. Returning to Last Chance after a rough divorce, the town's handsome new fire chief just wants safety and stability-a tall order given his dangerous job and the way he has the attention of a...