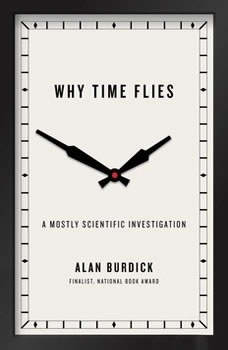 “Time” is the most commonly used noun in the English language; it’s always on our minds and it advances through every living moment. But what is time, exactly? Do children experience it the same way adults do? Why does it seem to slow down when we’re bored and speed by as we get older? How and why does time fly?In this witty and meditative exploration, award-winning author and New Yorker staff writer Alan Burdick takes readers on a personal quest to understand how time gets in us and why we perceive it the way we do. In the company of scientists, he visits the most accurate clock in the world (which exists only on paper); discovers that “now” actually happened a split-second ago; finds a twenty-fifth hour in the day; lives in the Arctic to lose all sense of time; and, for one fleeting moment in a neuroscientist’s lab, even makes time go backward. Why Time Flies is an instant classic, a vivid and intimate examination of the clocks that tick inside us all.