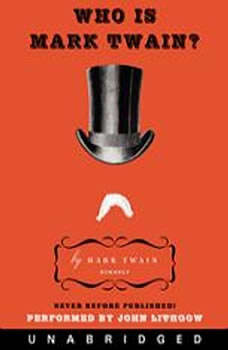 Who Is Mark Twain?

“[Twain] was, in the phrase of his friend William Dean Howells, ‘the Lincoln of our literature’... At the heart of his work lies that greatest of all American qualities: irreverence.” — Washington Post “More than 100 years after [Twain] wrote these stories, they remain not only remarkably funny but remarkably modern.... Ninety-nine years after his death, Twain still manages to get the last laugh.” — Vanity Fair Who Is Mark Twain? is a collection of twenty six wickedly funny, thought-provoking essays by Samuel Langhorne Clemens—aka Mark Twain—none of which have ever been published before, and all of which are completely contemporary, amazingly relevant, and gut-bustingly hilarious.

New York Times bestselling author Catherine Ryan Hyde returns with an unforgettable story of courage.Seventeen-year-old Ethan Underwood is totally unprepared to search for his father in the Blythe River National Wilderness. Not only is he small, scr...

From New York Times bestselling author Catherine Ryan Hyde comes a moving novel about two strangers who find that kindness is a powerful antidote to fear.Raymond Jaffe feels like he doesn’t belong. Not with his mother’s new family. Not a...

Five great American short story writers, dating from the turn of the nineteenth/twentieth centuries are represented here. Different in atmosphere and writing style, they nevertheless caught the mood and concerns of the day in a way that was distinct...

The Wake Up
by Catherine Ryan Hyde

From New York Times bestselling author Catherine Ryan Hyde comes a hauntingly emotional novel of how one man’s life changes forever when he rediscovers his ability to feel the pain of others.Something has been asleep in forty-year-old cattle r...

Noted transcendentalist Henry David Thoreau spent two years, two months, and two days chronicling his near-isolation in the small cabin he built in the woods near Walden Pond on land owned by his mentor, the father of Transcendentalism, Ralph Waldo ...

Where do you begin with a writer as original and brilliant as David Foster Wallace? Here--with a carefully considered selection of his extraordinary body of work, chosen by a range of great writers, critics, and those who worked with him most clos...