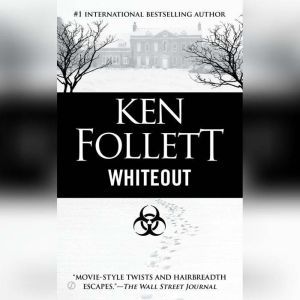 "Everyone likes a page-turner, and Follett is the best." —The Philadelphia Inquirer

"A hell of a storyteller" (Entertainment Weekly), #1 New York Times bestselling author Ken Follett reinvents the thriller with each new novel. But nothing matches the intricate knife-edge drama of Whiteout. . . .

A missing canister of a deadly virus. A lab technician bleeding from the eyes. Toni Gallo, the security director of a Scottish medical research firm, knows she has problems, but she has no idea of the nightmare to come.

As a Christmas Eve blizzard whips out of the north, several people, Toni among them, converge on a remote family house. All have something to gain or lose from the drug developed to fight the virus. As the storm worsens, the emotional sparks—jealousies, distrust, sexual attraction, rivalries—crackle; desperate secrets are revealed; hidden traitors and unexpected heroes emerge. Filled with startling twists at every turn, Whiteout rockets Follett into a class by himself.

Look out for Ken's newest book, A Column of Fire, available now.