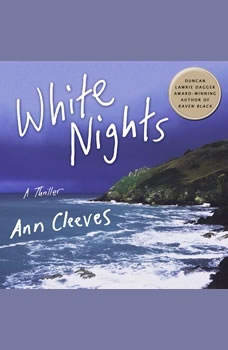 The electrifying follow up to the award-winning Raven BlackRaven Black received crime fiction's highest monetary honor, the Duncan Lawrie Dagger Award. Now Detective Jimmy Perez is back in an electrifying sequel.It's midsummer in the Shetland Islands, the time of the white nights, when birds sing at midnight and the sun never sets. Artist Bella Sinclair throws an elaborate party to launch an exhibition of her work at The Herring House, a gallery on the beach.The party ends in farce when one the guests, a mysterious Englishman, bursts into tears and claims not to know who he is or where he's come from. The following day the Englishman is found hanging from a rafter, and Detective Jimmy Perez is convinced that the man has been murdered. He is reinforced in this belief when Roddy, Bella's musician nephew, is murdered, too.But the detective's relationship with Fran Hunter may have clouded his judgment, for this is a crazy time of the year when night blurs into day and nothing is quite as it seems.A stunning second installment in the acclaimed Shetland Island Quartet, White Nights is sure to garner American raves for international sensation Ann Cleeves. This series is the basis for the hit BBC show Shetland,starring Douglas Henshall, which attracted over 12 million viewers in its first two nights on the air.

Past Reason Hated
by Peter Robinson

A picturesque Yorkshire village is dressed in its finest for the upcoming Noel. But one of its residents will not be celebrating this holiday. Chief Inspector Alan Banks knows that secrecy can sometimes prove fatal—and secrets were the drivin...

In the third novel of this bestselling series, London investigator Maisie Dobbs faces grave danger as she returns to the site of her most painful WWI memories to resolve the mystery of a pilot's death.Every once in a while, a detective bursts on the...

Wings of Fire
by Charles Todd

When reclusive war poet Olivia Marlowe and her half brother Nicholas Cheney die together in their ancestral home on the Cornish coast, it looks like suicide. The grieving relatives gather together to discuss the fate of Barcombe Hall, when another s...

"The murderer is with us—on the train now . . ."Just after midnight, the famous Orient Express is stopped in its tracks by a snowdrift. By morning, the millionaire Samuel Edward Ratchett lies dead in his compartment, stabbed a dozen times, hi...

A Fatal Grace
by Louise Penny

Winner of the 2007 Agatha Award for Best Novel!Welcome to winter in Three Pines, a picturesque village in Quebec, where the villagers are preparing for a traditional country Christmas, and someone is preparing for murder.No one liked CC de Poitiers....

Winner of the New Blood Dagger, Arthur Ellis, Barry, Anthony, and Dilys awards.Chief Inspector Armand Gamache of the Surete du Quebec and his team of investigators are called in to the scene of a suspicious death in a rural village south of Montreal...

A week's holiday in a luxurious hotel is just what Scotland Yard's Superintendent Duncan Kincaid needs. But his vacation ends dramatically with the discovery of a dead body in the whirlpool bath. Despite a suspicious lack of cooperation from the loc...