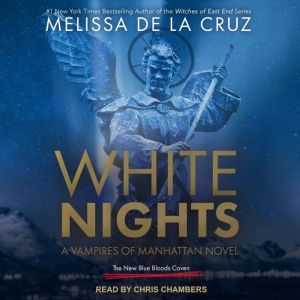 In this next installment from beloved author Melissa de la Cruz, the Vampires of Manhattan series continues on at a breathless pace. Oliver Hazard-Perry, once leader of the Coven, is now a broken man and enlists the help of his friends Jack Force and Schuyler Van Alen to redeem himself and search for his lost love, Finn Chase, who has disappeared into the sophisticated streets of Stockholm. Meanwhile, back in the city, venators Ara Scott and Edon Marrok's investigation into a surge of Nephlim (those dangerous half-human, half demons) activity has come to a dead end. As quickly as they arrived, the Nephilim have all mysteriously disappeared from New York. Where did they go? And does the answer lie in the hidden caverns and remote glaciers of the Scandinavian peninsula? As the sun stretches summer days into white nights, the loyal crew encounters its most devastating trial yet, one that brings everything they believe into question and everything they love into danger.