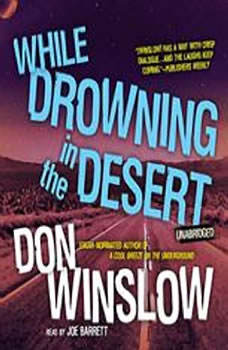 While Drowning in the Desert: The Neal Carey Mysteries, Book 5

Shamus Award winner and Edgar Award nominee Don Winslow combines breathless suspense, zany wit, and whiplash action in his latest novel featuring grad student/private eye Neal Carey. Now Neal is assigned to escort monkeyish octogenarian Natty Silver home from Las Vegas to Palm Springs. Natty, once a burlesque top banana, has a nonstop barrage of corny jokes, an eye for an aging cocktail waitress, and a chronic disappearing act. When Neal catches up with him, he can see why Natty doesnt want to go home. Sole witness to a crime, hes now the quarry of hardfaced suits, a fascist con artist, and a careertrack assassin. And bodyguard Nealscorching through the trackless desert at eighty miles per hour, brooding on his inner child by freezing starlight, and looking down the barrel of one gun too manyis soon dodging vultures and on the brink of a surprise watery grave.