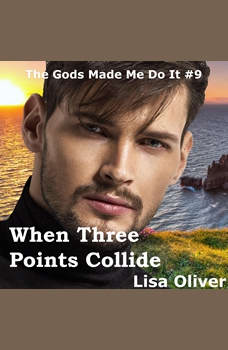 Series: The Gods Made Me Do It

An ancient god, a demon, and a wolf shifter walk into a bar. No, it's not the start of a joke, but Ra, The Father of Everything in the ancient Egyptian pantheon, thinks the Fates might be playing a joke on him when he drops in to try and help Cass and Wesley with their latest case. Seeing his mate for the first time, fighting for his life against three assassins should've been a cause for celebration, but Ra already knew the brave wolf shifter was destined for someone else.

Arvyn, alpha wolf shifter, didn't know what to think. One minute he was fighting off three attackers, the next, those attackers were frozen like statues and he was confronted with another wolf shifter and a demon. But he already knew, he'd heard his mate was locked up in a basement in the nearby vampire coven and he wasn't going to let anyone stop him from meeting and saving the one intended for him.

In the meantime, Kirill, Prince of the Dublin Coven was furious. Being chained to a wall in his own basement was the height of insult and as soon as he got his hands on the vampire responsible, that man's head was going to be permanently parted from his body. What he didn't expect, when he was busy trying to get out of his cell, was a feeling of calm that suddenly came over him, or the single drop of blood hovering in front of his face.

Three completely different men, all thrown together in one point in time. Can they build a future together the way the Fates intended, or will their differences split them apart?

This is an M/M/M menage MPREG Fated Mates story, although the mpreg is not the main focus of this story. As with all of my stories, this book contains insta-lust, a journey towards love, no cheating and a guaranteed HEA.

Passions of a Papillon
by Tara Lain

The Gods Made Me Do It Bundle

When Three Points Collide: Ra's Sto...
The Gods Made Me Do It

Get Over It
The Gods Made Me Do It