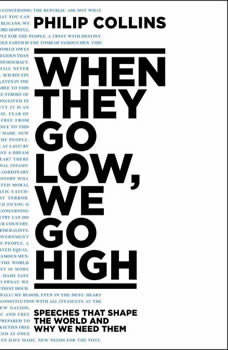 When They Go Low, We Go High

When First Lady Michelle Obama approached the podium at the 2016 Democratic National Convention, nobody could have predicted that her rousing and emotional “When they go low, we go high” speech would go on to become the motto for the political left and an anthem for opponents of oppression worldwide. It was a speech with the kind of emotional pull rarely heard these days, joining a long list of addresses that have made history. But what about Obama’s speech made it so great? When They Go Low, We Go High explores the most notable speeches in history, analyzing the rhetorical tricks to uncover how the right speech at the right time can profoundly shape the world. Traveling across continents and centuries, political speechwriter Philip Collins reveals what Thomas Jefferson owes to Cicero and Pericles, who really gave the Gettysburg Address, and what Elizabeth I shares with Winston Churchill. In telling the story of great and sometimes infamous speeches—including those from Lincoln, Woodrow Wilson, JFK, Martin Luther King, Jr., Disraeli, Hitler, Elie Wiesel, Margaret Thatcher, and Barack and Michelle Obama—Collins breathes new life into words you thought you knew well, telling the story of democracy. Whether it’s the inaugural addresses of presidents or the revolutionary writings of Castro, Pankhurst, and Mandela, Collins illuminates and contextualizes these moments with sensitivity and humor.When They Go Low, We Go High is a strong defense of the power of public speaking to propagate and protect democracy and an urgent reminder that when great men and women speak to us, their words can change the world.

From Socrates to Charles I, Danton to Lincoln – here are some of history’s most significant figures with their most important speeches. Fighting for justice, for freedom of speech, and sometimes even for their own lives, these ...

Speeches by Great Hall of Famers
by SpeechWorks

From baseball's Joe DiMaggio to NASCAR's Dale Earnhardt, Speeches by Great Hall of Famers is a collection of more than fifty inspiring speeches by some of the greatest athletes of all time.BaseballJoe DiMaggioMickey MantleCasey StengelFrank Robinson...

Great Speeches by the First Ladies of the United States highlights twenty-five of the most important and well-known speeches by our nation's First Ladies. This collection includes speeches by Eleanor Roosevelt, Jacqueline Kennedy, Lady Bird Johnson,...

Abraham Lincoln delivered his second inaugural address on March 4, 1865, during his second inauguration as president of the United States. At a time when victory over the secessionists in the American Civil War was within days and slavery was near a...

Moyers on Democracy
by Bill Moyers

Bill Moyers on America today:“Here in the first decade of the twenty-first century the story that becomes America’s dominant narrative will shape our collective imagination and our politics for a long time to come. In the searching of ou...

Christopher Hitchens was arguably the most erudite, provocative, and polarizing writers of the last 25 years. When he passed away in 2011 from esophageal cancer, writers, readers, listeners, pundits and critics the world over mourned his loss. AN...

Arguably the most celebrated and revered writer of our time now gives us a new nonfiction collection--a rich gathering of her essays, speeches, and meditations on society, culture, and art, spanning four decades.The Source of Self-Regard is brimming...