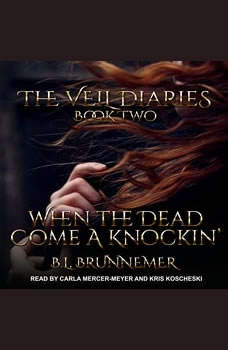 When the Dead Come A Knockin'

My name is Alexis Delaney, and I'm your average seventeen-year-old girl. Except I'm a Necromancer. Which means I can see the dead, talk to them, and help them move on. Well, I used to be able to. Someone has sealed the Veil. Now the dead are stuck here. And with the extra energy floating around town, the ghosts are getting stronger. It's been two months since I came to Spring Mountain to live with Uncle Rory. And the guys, my five best friends, have done everything they can to help since. Things for once were almost normal; my issues with the dead had become routine. Until they all found girlfriends. Now I'm back to hiding everything again. With ghosts leaving their haunting grounds at will and new people asking questions as I try to build my link to the Veil, I don't know how the hell I'm going to pull this one off. But it can't get that bad, right?

When the Dead Come A Knockin'
Veil Diaries #2

Secrets From the Grave
Veil Diaries #6