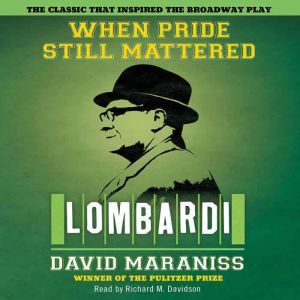 When Pride Still Mattered: A Life Of Vince Lombardi

When Pride Still Mattered is the quintessential story of the American family: how Vince Lombardi, the son of an immigrant Italian butcher, rose to the top, and how his character and will to prevail transformed him, his wife, his children, his players, his sport, and ultimately the entire country. It is also a vibrant football story, abundant with accounts of Lombardi's thrilling life in that world, from his playing days with the Seven Blocks of Granite at Fordham in the 1930s to the glory of coaching the Green Bay Packers in the 1960s. It is also a study of national myths, tracing what Pulitzer Prize-winning biographer David Maraniss calls the fallacy of the innocent past, and an absorbing account of the mythmakers from Grantland Rice to Howard Cosell who shaped Lombardi's image. By the time he died of cancer in 1970, after one season in Washington during which he transformed the Redskins into winners, Lombardi had become a mythic character who transcended sport, and his legend has only grown in the decades since. In When Pride Still Mattered, Maraniss renders Lombardi as flawed and driven yet ultimately misunderstood, a heroic figure who was more complex and authentic than the stereotypical images of him propounded by admirers and critics. Using the same meticulous reporting and sweeping narrative style that he employed in First in His Class, his classic biography of Bill Clinton, Maraniss separates myth from reality and wondrously recaptures Vince Lombardi's life and times.