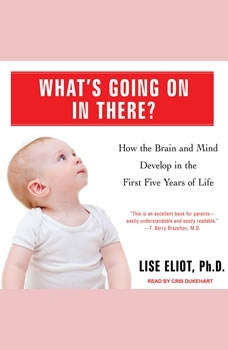 What's Going on in There?: How the Brain and Mind Develop in the First Five Years of Life

As a research neuroscientist, Lise Eliot has made the study of the human brain her life's work. But it wasn't until she was pregnant with her first child that she became intrigued with the study of brain development. She wanted to know precisely how the baby's brain is formed, and when and how each sense, skill, and cognitive ability is developed. And most importantly, she was interested in finding out how her role as a nurturer can affect this complex process. How much of her baby's development is genetically ordained—and how much is determined by environment? Is there anything parents can do to make their babies' brains work better—to help them become smarter, happier people? Drawing upon the exploding research in this field as well as the stories of real children, What's Going On in There? is a lively and thought-provoking book that charts the brain's development from conception through the critical first five years. In examining the many factors that play crucial roles in that process, What's Going On in There? explores the evolution of the senses, motor skills, social and emotional behaviors, and mental functions such as attention, language, memory, reasoning, and intelligence. This remarkable book also discusses: how a baby's brain is "assembled" from scratchthe critical prenatal factors that shape brain development how the birthing process itself affects the brain which forms of stimulation are most effective at promoting cognitive development how boys' and girls' brains develop differently how nutrition, stress, and other physical and social factors can permanently affect a child's brain Brilliantly blending cutting-edge science with a mother's wisdom and insight, What's Going On in There? is an invaluable contribution to the nature versus nurture debate. Children's development is determined both by the genes they are born with and the richness of their early environment. This timely and important book shows parents the innumerable ways in which they can actually help their children grow better brains.

Secrets of the Baby Whisperer
by Tracy Hogg

There is nothing so joyous as the birth of the child and, all too often, nothing so confusing, intimidating, and downright terrifying for the new parents. Why won't she stop crying? How can I get him to go to sleep?  If breastfeeding is nature'...

The Sh!t No One Tells You
by Dawn Dais

There comes a time in every new mother's life when she finds herself staring at her screaming, smelly "bundle of joy" and wishing someone had told her that her house would reek of vomit, or that she shouldn't buy the cute onesies with a thousand imp...