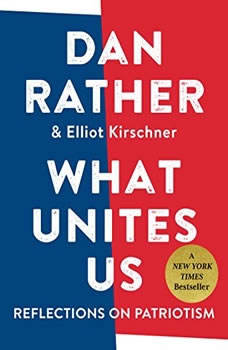 What Unites Us: Reflections on Patriotism

At a moment of crisis over our national identity, Dan Rather has been reflecting—and writing passionately almost every day on social media—about the world we live in, what our core ideals have been and should be, and what it means to be an American.

A Senior Political Reporter examines how Trump, a man with no detectable personal qualities outside of resentment and the will to dominate, could appeal to millions of Americans and win the highest office in the land.The election of Donald Trump in ...

In the bestselling tradition of Hillbilly Elegy comes an exploration of the American heartland—a fascinating and eye-opening collection of interviews and stories about the powerful grassroots populist movement of frustrated Americans left behi...

"YOU NEVER REALLY OWN FREEDOM, YOU ONLY PRESERVE IT FOR THE NEXT GENERATION." Issuing a bold wake-up call to America, New York Times best-selling author Brigitte Gabriel reveals the people, organizations, and forces at work to dismant...

From a Pulitzer Prize-winning reporter, the powerful story of how a prominent white supremacist changed his heart and mindDerek Black grew up at the epicenter of white nationalism. His father founded Stormfront, the largest racist community on the I...

This program is read by the author.The definitive firsthand account of the movement that permanently broke the American political consensus.What do internet trolls, economic populists, white nationalists, techno-anarchists and Alex Jones have in com...

The 2016 election of Donald J. Trump exposed a deep divide in American politics and culture, one that pollsters and pundits didn't seem to realize was there. But Trump did, and he used it to his advantage in ways that surprised nearly everyone, ...

The End of Europe
by James Kirchick

Once the world's bastion of liberal, democratic values, Europe is now having to confront demons it thought it had laid to rest. The old pathologies of anti-Semitism, populist nationalism, and territorial aggression are threatening to tear the Europe...

Whiteshift: the turbulent journey from a world of racially homogeneous white majorities to one of racially hybrid majoritiesThis is the century of whiteshift. As Western societies are becoming increasingly mixed-race, demographic change is transform...

The Nationalist Revival
by John B. Judis

Why Has Nationalism Come Roaring Back?Trump in America, Brexit in the U.K., anti-EU parties in Italy, Germany, France, the Netherlands, Austria, Poland, and Hungary, and nativist or authoritarian leaders in Turkey, Russia, India, and China -- Why ha...