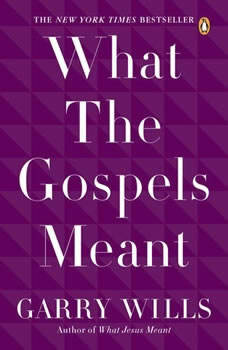 What the Gospels Meant

“A remarkable achievement—a learned yet eminently readable and provocative exploration of the four small books that reveal most of what’s known about the life and death of Jesus.” (Los Angeles Times)

Look out for a new book from Garry Wills, What the Qur'an Meant, coming fall 2017.

In his New York Times bestsellers What Jesus Meant and What Paul Meant, Garry Wills offers tour-de-force interpretations of Jesus and the Apostle Paul. Here Wills turns his remarkable gift for biblical analysis to the four gospels of Matthew, Mark, Luke, and John. Wills examines the goals, methods, and styles of the evangelists and how these shaped the gospels' messages. Hailed as "one of the most intellectually interesting and doctrinally heterodox Christians writing today" (The New York Times Book Review), Wills guides readers through the maze of meanings within these foundational texts, revealing their essential Christian truths.

In this timely, provocative, and uplifting journey, the bestselling author of Walking the Bible searches for the man at the heart of the world's three monotheistic religions -- and today's deadliest conflicts. At a moment when the world is asking, ...

In James Carroll's provocative reading of the deep past, the Bible's brutality responded to the violence that threatened Jerusalem from the start. Centuries later, the mounting European fixation on a heavenly Jerusalem sparked both anti-Semitism and...

The Marketing of Evil
by David Kupelian

Americans have come to tolerate, embrace and even champion many things that would have horrified their parents’ generation – from easy divorce and unrestricted abortion-on-demand to extreme body piercing and teaching homosexuality to gra...

The Case for God
by Karen Armstrong

Moving from the Paleolithic age to the present, Karen Armstrong details the great lengths to which humankind has gone in order to experience a sacred reality that it called by many names, such as God, Brahman, Nirvana, Allah, or Dao. Focusing especi...

Prayer in America (One Nation Under God)
by James P. Moore, Jr.

In this highly original approach to the history of the United States, James Moore focuses on the extraordinary role that prayer has played in every area of American life, from the time of the first settlers to the present day and beyond.A stirring c...

NEW YORK TIMES BESTSELLER • The bestselling author of Zealot and host of Believer explores humanity’s quest to make sense of the divine in this concise and fascinating history of our understanding of God.  In Zealot, Reza Aslan repla...

One Nation, Under Gods
by Peter Manseau

A groundbreaking new look at the story of AmericaAt the heart of the nation's spiritual history are audacious and often violent scenes. But the Puritans and the shining city on the hill give us just one way to understand the United States. Rather t...