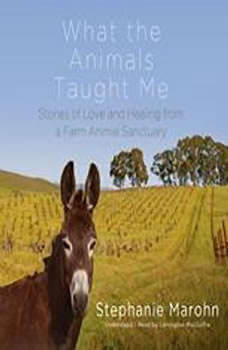 What the Animals Taught Me: Stories of Love and Healing from a Farm Animal Sanctuary

What the Animals Taught Meis a collection of stories about rescued farm animals in a shelter in Sonoma County, California, and what these animals can teach us. Each story illuminates how animals can help us see and embrace others as they truly are and reconnect us with the natural world. Wishing to escape the urban rat race, freelance writer and editor Stephanie Marohn moved to rural northern California in 1993. Life was sweet. She was a busy freelancer. In return for reduced rent, she fed and cared for two horses and a donkey. Her life was full. Then, more farm animals started to appear: a miniature white horse, a donkey, sheep, chickens, followed by deer and other wildlife. Each one needed sanctuary either from abuse, physical injury, or neglect. Marohn took each animal in and gradually turned her ten-acre spread into an animal sanctuary. Each chapter ofWhat the Animals Taught Mefocuses on the story of a particular animal that became part of Marohns life. She shares what she learned from the sheep she rescued from an animal collector, the abused donkey she helped nurse back to health, and many others to remind us that animals have much to teach us about love, compassion, trust, and many of the qualities we so often try to cultivate in ourselves. A deeply inspiring collection,What the Animals Taught Meawakens our hearts and reminds us that our best life teachers sometimes come covered in fur.