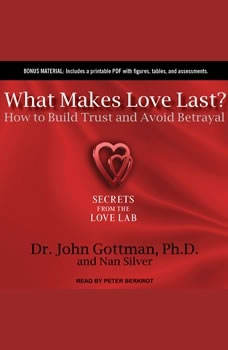 What Makes Love Last?: How to Build Trust and Avoid Betrayal

Dr. John Gottman, the country's preeminent researcher on marriage, is famous for his Love Lab at the University of Washington in Seattle where he deciphers the mysteries of human relationships through scientific research. His thirty-five years of exploration have earned him numerous awards, including from the National Institute of Mental Health, the American Psychological Association, and the American Association for Marriage and Family Therapy. Now, Dr. Gottman offers surprising findings and advice on the characteristic that is at the heart of all relationships: Trust. Dr. Gottman has developed a formula that precisely calculates any couple's loyalty level. The results determine a relationship's likely future, including the potential for one or both partners to stray. What Makes Love Last? shows couples how to bolster their trust level and avoid what Dr. Gottman calls the "Roach Motel for Lovers." He describes how the outcome of "sliding door moments," small pivotal points between a couple, can lead either to more emotional connection or to discontent. He suggests a new approach to handling adultery and reveals the varied and unexpected non-sexual ways that couples often betray each other. What Makes Love Last? guides couples through an empirically tested, trust-building program that will help them repair and maintain any long-term, intimate romantic relationship.

Divorce with Grace
by Lori Anderson

A step-by-step guide to healing, releasing & ultimately thriving When you walked down the aisle and said, "I do," did you ever think you'd be saying, "I don't"? During a difficult divorce, author Lori Anderson set out on a quest for healing. Ha...

If You're in My Office, It's Already Too Late
by James J. Sexton

"Sexton's narration debut is impressive. He reads smoothly, with animated conviction and passion for his subject that shine through." — AudioFile MagazineThis program is read by the authorIn this pertinent audiobook, hard-hitting divorce lawye...

This is Me Letting You Go
by Heidi Priebe

Letting go is not a process that comes naturally to us. In a world that teaches us to cling to what we love at all costs, there is an undeniable art to moving on—and it's one that we are constantly relearning. In this series of honest and poig...

All Happy Families
by Jeanne McCulloch

The Glass Castle meets The Nest in this stunning debut, an intimate family memoir that gracefully brings us behind the dappled beachfront vista of privilege, to reveal the inner lives of two wonderfully colorful, unforgettable families.On a mid-Aug...

Gerald Nissenbaum knows everything about his clients—how much is in their bank accounts, what kind of sex their spouses like, if they married for money or power, and who cheated with whom. For the first time in his long career, Nissenbaum give...

Are you in a marriage that could do with some help?Do you sometimes feel that your marriage needs improvement to help it last the course?This audiobook could help save your relationship!Marriage should be for life. Those are the commitments that are...

You are here because you are in a lot of pain. Your heart has been broken into a million pieces and the person that you love is gone. This is a really hard place to be and nobody wants to be here. The book starts where you are, as the author documen...

A wise and inspiring guide to creating a happy and healthy blended family by Mashonda Tifrere with contributions from her co-parents--Swizz Beatz and his wife, Grammy-Award winning singer and songwriter Alicia Keys.In January 2010, founder of ArtLea...