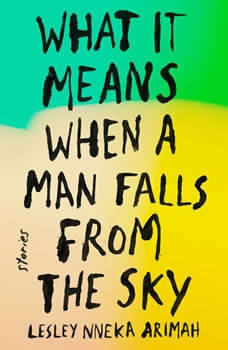 What It Means When a Man Falls from the Sky: Stories

A NATIONAL BOOK FOUNDATION "5 UNDER 35" HONOREE

WINNER OF THE 2017 KIRKUS PRIZE

A dazzlingly accomplished debut collection explores the ties that bind parents and children, husbands and wives, lovers and friends to one another and to the places they call home.

In “Who Will Greet You at Home,” a National Magazine Award finalist for The New Yorker, A woman desperate for a child weaves one out of hair, with unsettling results. In “Wild,” a disastrous night out shifts a teenager and her Nigerian cousin onto uneasy common ground. In "The Future Looks Good," three generations of women are haunted by the ghosts of war, while in "Light," a father struggles to protect and empower the daughter he loves. And in the title story, in a world ravaged by flood and riven by class, experts have discovered how to "fix the equation of a person" - with rippling, unforeseen repercussions.

Evocative, playful, subversive, and incredibly human, What It Means When a Man Falls from the Sky heralds the arrival of a prodigious talent with a remarkable career ahead of her.